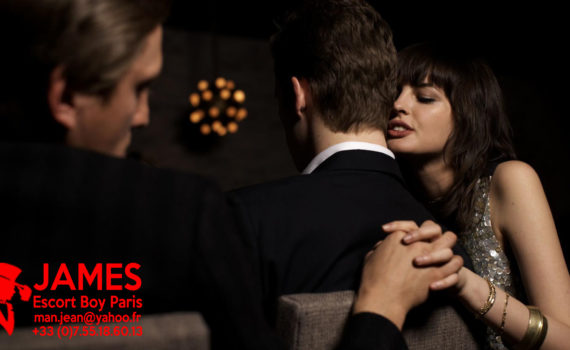 Her husband had the fantasy of sharing his wife with another gentleman. In order to organize this amazing experience, he asked James, a handsome french gentleman who offers his coaching services in Paris, to be their partner. They met for a cocktail at the rooftop bar of their luxury hotel in Paris.

It was the most exciting moment of their sexual life. After a nice conversation, they decided for a sensual massage in their room. Her husband was dreaming that this massage will help his wife to engage in intercourse with the gentleman. At this point nothing was sure and the lady worried of being touched by an unknown man, even though she was excited by such a situation.

The couple led the gentleman into their bedroom and James asked them to dim the lights, he lighted 4 candles and put on some sensual music.

James asked her to take off her clothes and lay down on the bed onto her stomach. Her husband was sitting on a chair to watch his wife in the hands of another man.

As he unleashed the tension and loosened the kinks with a professional quality massage, she moaned.

Suddenly, he was licking her legs up to her buttocks then up on her back to the shoulders. He kissed and licked every inch of her body. She was feeling the heat between her legs and her pussy was slowly getting wet.

His mouth and tongue worked their way to her shoulders. He kissed and licked each arm from shoulder to fingertips. Then he sucked each finger. He asked her to flip over in order to massage her other side.

James treated her to the most divine head she have ever experienced. His tongue lapped her labia, sucked her clit, tickled her inner thighs, penetrated her with his fingers and devoured her sweet pussy, kissed her thighs. His movements were so slow and skillful that she was slowing reaching a sort of heaven of pleasure.

Her husband was stroking his hard cock as he took in the sight of his wife riding another man’s face, she was stroking the top of his head as he ate her.

Their first kiss, their first touch of the genitals, the first time she took him in her mouth, when he first applied his mouth to her womanhood. But now his wife licked another man’s erect cock slowly from the base to the tip, then with her hand gripping his shaft, she sucked its end into her mouth. Bobbing her head eagerly down on him, enjoying the feel of so much manhood stretching her lips, filling her cheeks, reaching to her throat.

Then her husband decided to enter in the game and he kissed her, they sucked on each other’s tongues, and it was passionate. In the meantime, the gentleman was licking her without mercy using his fingers exploring all the inside of her pussy.

And now, as she crouched over his hips, and he held aloft his huge erection covered by a condom, the first time that his wife actually took another man’s cock inside her pussy since they had started dating some years ago.

Then his wife eased herself down onto James’s great shaft, and bounced on him such that her husband could see that huge veined length sinking into her each time, her hungry pussy slurping it up, spitting it out, coating it in her copious juices.

It was exhausting and exhilarating, and went late into the evening. The two of them making out like animals, fucking like dogs.

He got to see his pretty wife coming more than she had in the past year in one evening, and that egotistical part of him, which he might actually have been relying on to get him through the whole experience, told him firmly that it wasn’t merely some other man giving her this pleasure, it was him, because he had agreed to this.

Then she turned, curled a hand around James’s head, and gently but firmly pulled his mouth to hers so she could suck on his lips. They kissed, right in front of him, slowly, passionately.

Her husband kissed her between the thighs, wedging her head against her hot flesh, pressing his face up against his hot wife’s pussy, breathing in that dark, dangerous scent of her arousal.

She moaned, and her moan intensified as he sucked, as he tasted her wicked pussy. Her husband watched James touching her between the legs, stroking her. Watched her lift her hips to ease his access.

He wanted the gentleman that fucked his wife to play with her. This was an experience for them, an experience beyond what they already had.

Then James whispered in the wife’s ear if she would agree for him to fuck her ass and she said yes. He started to lube up the wife’s ass with his fingers, she’s loved it.

Something she would never have done with him. James was getting more into it, probing her ass with his fingers. James put a new condom.

Then James did press deftly against her tight sphincter, easing the huge knob of his cock against her asshole as he leaned forward. His wife was gasping and moaning, in total ecstasy right next to her husband as he did this.

It was obvious from the look on her face that she loved this.

James was fucking her tight ass with deep, even and plowing strokes, burying himself all the way on every stroke. His balls came to rest on her dripping pussy lips and she cried out in orgasmic little mewling sounds.

She shrieked, and her eyes actually rolled back in her head as her climax teared through her.

Then James did offer them to do a double take, His wife went on top of her husband and her pussy swallowed his entire cock, she bent over and wiggled her ass. James put another condom and lubed himself up again and he worked his way up her anus. The double penetration dilated her eyes.

Looking to giving you pleasure with a sensual massage or more, everything is possible. Let’s get to know each other around a drink in a nice lounge bar in Paris without commitment and I’ll tell you everything you burn to know.